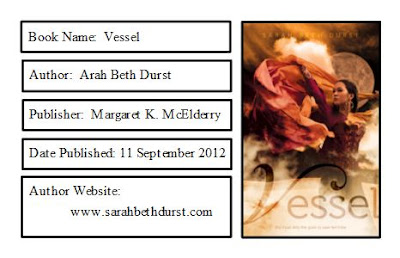 In a desert world of sandstorms and sand-wolves, a teen girl must defy the gods to save her tribe in this mystical, atmospheric tale from the author of Drink, Slay, Love.

Liyana has trained her entire life to be the vessel of a goddess. The goddess will inhabit Liyana’s body and use magic to bring rain to the desert. But Liyana’s goddess never comes. Abandoned by her angry tribe, Liyana expects to die in the desert. Until a boy walks out of the dust in search of her.

Korbyn is a god inside his vessel, and a trickster god at that. He tells Liyana that five other gods are missing, and they set off across the desert in search of the other vessels. For the desert tribes cannot survive without the magic of their gods. But the journey is dangerous, even with a god’s help. And not everyone is willing to believe the trickster god’s tale.

The closer she grows to Korbyn, the less Liyana wants to disappear to make way for her goddess. But she has no choice: She must die for her tribe to live. Unless a trickster god can help her to trick fate—or a human girl can muster some magic of her own.


I really cannot write enough good about this book.  It was amazing.  I was engrossed from the first page to the last.  Liyana is a great character, and I love how she grows and learns and develops her own viewpoint and uniqueness.  Her endpoint is a far cry from her start as a willing sacrifice for her clan, even if the same moral compass guides them both.  I also liked the development of Korbyn.  He was an interesting concept, a human shell being used to house a god, and he really is torn by the duality of it and how to help people best to make his shell's sacrifice worth it.  The plot of this book is great, always moving with just enough rest periods that you're not barreling through action the entire book.  It builds suspense well, and the romance is a tiny counterpoint (and although the villain is pretty obvious I love how I couldn't predict the end but once I saw it it totally made sense!).  The worldbuilding is where this book really shines, though.  From the magic of possession to the world of the gods to the small creatures living in the desert, Durst has filled her new world with a rich history and all the tiny details that make it really worth immersing in.  If I had to complain about anything it would be that there were secondary characters that felt underdeveloped, however, there really wasn't a lot of time to work with them either so I forgive it pretty easily.  Overall this book has become a favorite and will earn an honored spot on my shelf.

I received a review copy of this book from the publisher in exchange for a non-biased review.
Posted by Aurora at 8:00 AM