Waiting on Wednesday: When We Wake by Karen Healey 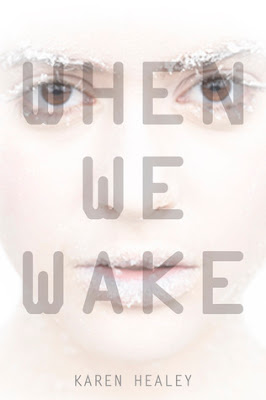 When We Wake by Karen Healey


My name is Tegan Oglietti, and on the last day of my first lifetime, I was so, so happy.

Sixteen-year-old Tegan is just like every other girl living in 2027--she's happiest when playing the guitar, she's falling in love for the first time, and she's joining her friends to protest the wrongs of the world: environmental collapse, social discrimination, and political injustice.
But on what should have been the best day of Tegan's life, she dies--and wakes up a hundred years in the future, locked in a government facility with no idea what happened.

Tegan is the first government guinea pig to be cryonically frozen and successfully revived, which makes her an instant celebrity--even though all she wants to do is try to rebuild some semblance of a normal life. But the future isn't all she hoped it would be, and when appalling secrets come to light, Tegan must make a choice: Does she keep her head down and survive, or fight for a better future?

Award-winning author Karen Healey has created a haunting, cautionary tale of an inspiring protagonist living in a not-so-distant future that could easily be our own.

Kinda sounds like Pearson's Fox series crossed with Revis' Universe series.  I think it sounds like a good combination!