I haven't been posting here much because I've been preparing for (and attending) WorldCon in Reno and Dragon*Con in Atlanta. At WorldCon I did costuming stuff, but at Dragon*Con I'm lucky enough to get to give a panel on The Hunger Games. I know it's a few days away, but here are the essays I'm using to study up for the panel:


Finally, the most awesome, a book that looks critically at themes in The Hunger Games series: 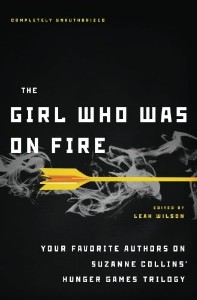 The Girl Who Was on Fire: Your Favorite Authors on Suzanne Collins' Hunger Games Trilogy Edited by Leah Wilson

In fact, I liked this book so much that for my first YASFF Book Giveaway I'm going to give away a copy!

1. Comment with your name (or pseudonym you'd like to use publicly).
2. I'll give an extra +1 chance of winning if you're a follower of my blog.
3. Winner will be announced on Tuesday, September 27th with a post in the blog. The winner has 72 hours to contact me at yasffblog(at)gmail(dot)com with their address or I reserve the right to choose another winner.
4. Contest is open only to residents of the US and Canada. Sorry international peeps, I hope to figure out international contests soon but not for this one.

That's it! I want to keep my first contest pretty simple, but I hope it tides you over until I can get out of the con costuming rush and back to writing book reviews!
Posted by Aurora at 10:43 PM