The Adoration of Jenna Fox by Mary E. Pearson 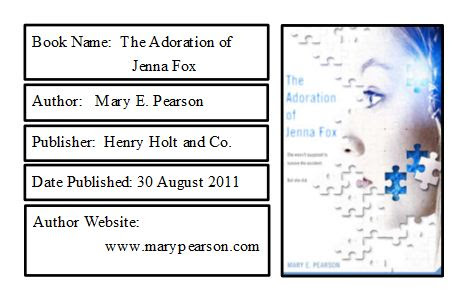 Who is Jenna Fox? Seventeen-year-old Jenna has been told that is her name. She has just awoken from a coma, they tell her, and she is still recovering from a terrible accident in which she was involved a year ago. But what happened before that? Jenna doesn't remember her life. Or does she? And are the memories really hers?

This fascinating novel represents a stunning new direction for acclaimed author Mary Pearson. Set in a near future America, it takes readers on an unforgettable journey through questions of bio-medical ethics and the nature of humanity. Mary Pearson's vividly drawn characters and masterful writing soar to a new level of sophistication.

This was a very difficult but absorbing and rewarding book. The plot is great, and, while I won’t give away the plot twists, I will admit that I saw some of them coming but not nearly as far as I usually would. To me this made the book the story of the journey I knew was coming, and how the characters arrive at the conclusions I had guessed was just as good as the twists being a surprise. The difficulty comes in the heavy source material: how do we determine that a person is worth life-saving medical interventions, especially when the public finances it? How much of their “original” body parts does a person have to lose before they’re no longer a person? Just how far should we go to save a life, even if we’re not sure that the outcome will be the same as us? What if those same lifesaving procedures could be used to prolong the life expectancy? How about if they double it? Triple it? Where is the point where you stop saving lives and start making “sins against nature”? I think the book deals with all these problems in a very open way, doing little to dictate and much more to provoke the reader into deciding for their self. The characters are well constructed, and the growth of Jenna’s emotions and her cognitive reasoning as she recovers from her accident and discovers more about herself is beautiful and seems as true-to-life as science fiction can be. The whole is an engaging read that will peak the interest of many readers, and after I finished the book I had to go out and get the sequel immediately. In all, a highly recommended read.
Posted by Aurora at 10:18 AM

Email ThisBlogThis!Share to TwitterShare to FacebookShare to Pinterest
Labels: Cyberpunk