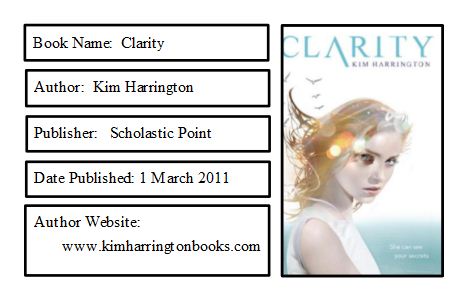 Clarity “Clare” Fern sees things. Things no one else can see. Things like stolen kisses and long-buried secrets. All she has to do is touch a certain object, and the visions come to her. It’s a gift. And a curse. When a teenage girl is found murdered, Clare’s ex-boyfriend wants her to help solve the case—but Clare is still furious at the cheating jerk. Then Clare’s brother—who has supernatural gifts of his own—becomes the prime suspect, and Clare can no longer look away. Teaming up with Gabriel, the smoldering son of the new detective, Clare must venture into the depths of fear, revenge, and lust in order to track the killer. But will her sight fail her just when she needs it most?


This was a great, fast read, and I’m not usually a fan of murder mysteries. I loved how Clarity’s powers worked and were explained, I didn’t feel like I ever had information dump or implausible rules, just a simple statement of fact and rules on how things worked that were well followed by the author. It was really great because it let you dive right in to the mystery of the story. The mystery is great, too, because Harrington knows exactly the right pacing in exposing the clues and bits of the mystery at just the right time to turn all your theories upsidown. I did hit upon the killer a couple of times in my round-about of suspects, but I was left guessing and re-guessing right up until the end, especially with why someone would do such a thing. I was also left guessing with the love triangle, which was a good place to be because it wasn’t so prominent that it took over the mystery and yet it was just entertaining enough to make me want to see it resolved. It wasn’t, really, but I’m satisfied with what did happen because it was realistic and true to character for everyone involved. And, speaking of characters, Clare is a great female lead. She’s witty and resourceful, and she has just enough power to make things fun and just enough limit on that power to make things frustrating. Her mouth often gets her into trouble, but she’s smart and gets herself out of it almost as much. Even when she’s in trouble Clare’s no damsel in distress, and the lead characters spend much time supporting and saving each other so there’s no real feeling that she’s always the damsel in distress. In fact, all the female characters in this book are well put-together as people, not stereotypes, with their own motivations, hopes, and dreams. In fact, if anyone fits even barely into the damsel in distress stereotype it is Perry, Claire’s older brother. I like twists like that.
Posted by Aurora at 10:44 PM