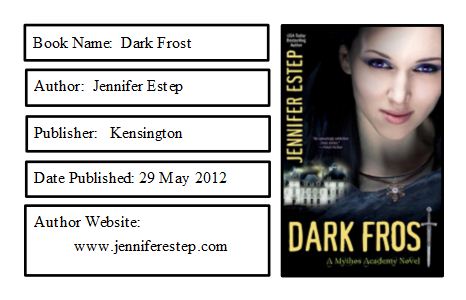 I’ve seen so many freaky things since I started attending Mythos Academy last fall. I know I’m supposed to be a fearless warrior, but most of the time, I feel like I’m just waiting for the next Bad, Bad Thing to happen. Like someone trying to kill me—again.

Everyone at Mythos Academy knows me as Gwen Frost, the Gypsy girl who uses her psychometry magic to find lost objects—and who just may be dating Logan Quinn, the hottest guy in school. But I’m also the girl the Reapers of Chaos want dead in the worst way. The Reapers are the baddest of the bad, the people who murdered my mom. So why do they have it in for me?

It turns out my mom hid a powerful artifact called the Helheim Dagger before she died. Now, the Reapers will do anything to get it back. They think I know where the dagger is hidden, but this is one thing I can’t use my magic to find. All I do know is that the Reapers are coming for me—and I’m in for the fight of my life.

Yet another great book in the Frost series!  I am really loving where these books are going, both in the meta-plot and in the character development.  Speaking of the meta-plot, I don't know if this book is a little more transparent than the others or I am just getting better at figuring out the twists but I did guess who the villain was far ahead of the book's reveal.  I didn't care as much, though, because the book has some great pacing and I was enjoying the ride as much as the destination.   Gwen really develops as a character during this book.  The unexpected turn her magic takes is a great twist, and I really like how she grew as she dealt with it and its aftermath.  It also led to some interesting developments between her and Logan, and I will say (even though it's a bit spoilery) that I was glad to see the shoe on the other foot for a bit.  The final battle was not too long but still climactic, and the (again, spoilers) new champions were long foreshadowed but still very welcome.  I'll be looking to see more of them in Crimson Frost!


A copy of this book was provided to me free from NetGalley in exchange for an unbiased review.
Posted by Aurora at 8:00 AM