The Crown of Embers by Rae Carson 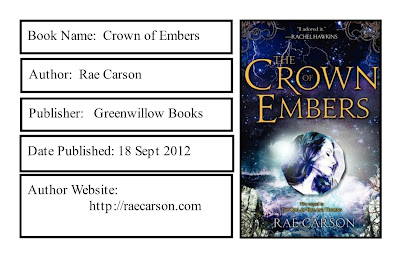 In the sequel to the acclaimed The Girl of Fire and Thorns, a seventeen-year-old princess turned war queen faces sorcery, adventure, untold power, and romance as she fulfills her epic destiny.

Elisa is the hero of her country. She led her people to victory against a terrifying enemy, and now she is their queen. But she is only seventeen years old. Her rivals may have simply retreated, choosing stealth over battle. And no one within her court trusts her-except Hector, the commander of the royal guard, and her companions. As the country begins to crumble beneath her and her enemies emerge from the shadows, Elisa will take another journey. With a one-eyed warrior, a loyal friend, an enemy defector, and the man she is falling in love with, Elisa crosses the ocean in search of the perilous, uncharted, and mythical source of the Godstone's power. That is not all she finds. A breathtaking, romantic, and dangerous second volume in the Fire and Thorns trilogy.

I had a few problems with Girl of Fire and Thorns, so I was a bit hesitant to read this book.  It's hard to have such a good thing destroyed by a blatant prejudice.  Fortunately this book was much more enjoyable.  The issue of Elis being fat was hardly mentioned and never mocked like it seemed the author was doing in book 1.  In the absence of fat-phobia Elisa actually became a delightful character.  She started out a little unsure of herself, a backslide from the last book, but an understandable one.  As the book goes on she manages to grow into herself and her role.  Of course, she has a lot to experience to change her!  This book is a plot gem, with intrigue and diabolical plots, spies and double agents, action and adventure.  There is a cast of thousands who move around each other in a ballet of suberfuge and power plays.  I think if I had to come up with a problem in this book it lay in the cast of thousands.  So many people were introduced with such little description or significance that I sometimes could not keep them straight.  And, of course, underneath it all is Elisa's romance!  The romance in this book was perfect.  It felt like it really built on respect and familiarity, not animal attraction, and the two players really seem like they've got the other person's best interests at heart even when they do stumble and fumble.  Lovers of the romance beware, though, the stumbles and fumbles will come, Elisa does not have an easy path, especially when combined with the rest of the plot.  This all leads up to a climax that is breathtaking and a denouement that will rip your heart out and throw it in the dirt.  In a good way, though.  The ending leaves just enough open for the sequel without being a huge cliffhanger, and it wraps up the plot in a satisfying way that middle books rarely get.