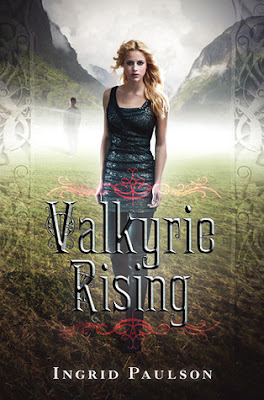 
Nothing ever happens in Norway. But at least Ellie knows what to expect when she visits her grandmother: a tranquil fishing village and long, slow summer days. And maybe she’ll finally get out from under the shadow of her way-too-perfect big brother, Graham, while she’s there.

What Ellie doesn’t anticipate is Graham’s infuriating best friend, Tuck, tagging along for the trip. Nor did she imagine boys going missing amid rumors of impossible kidnappings. Least of all does she expect something powerful and ancient to awaken in her and that strange whispers would urge Ellie to claim her place among mythological warriors. Instead of peace and quiet, there’s suddenly a lot for a girl from L.A. to handle on a summer sojourn in Norway! And when Graham vanishes, it’s up to Ellie—and the ever-sarcastic, if undeniably alluring Tuck—to uncover the truth about all the disappearances and thwart the nefarious plan behind them.

Deadly legends, hidden identities, and tentative romance swirl together in one girl’s unexpectedly-epic coming of age.


I love that fantasy seems to be bridging out into mythologies that are not the standard Greek/Roman pantheon.  This seems like it will be a great example: a strong girl and Norse gods.
Posted by Aurora at 8:00 AM