Froi of the Exiles by Melina Marchetta 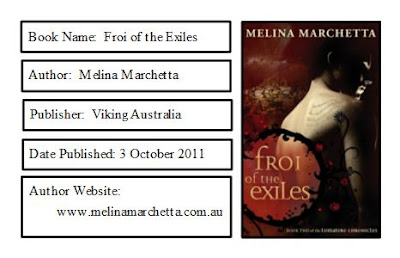 Blood sings to blood, Froi . . .Those born last will make the first . . . For Charyn will be barren no more.

Three years after the curse on Lumatere was lifted, Froi has found his home... Or so he believes...

Fiercely loyal to the Queen and Finnikin, Froi has been trained roughly and lovingly by the Guard sworn to protect the royal family, and has learned to control his quick temper. But when he is sent on a secretive mission to the kingdom of Charyn, nothing could have prepared him for what he finds. Here he encounters a damaged people who are not who they seem, and must unravel both the dark bonds of kinship and the mysteries of a half-mad Princess.

And in this barren and mysterious place, he will discover that there is a song sleeping in his blood, and though Froi would rather not, the time has come to listen.

Gripping and intense, complex and richly imagined, Froi of the Exiles is a dazzling sequel to Finnikin of the Rock, from the internationally best-selling and multi-award-winning author of Looking for Alibrandi, Saving Francesca, On the Jellicoe Road and The Piper's Son.

I think I'm going to dub the Finnikin books "YA Game of Thrones".  There are a lot of similarities between the two, and the epic fantasy political intrigue feels similar, too.  Froi of the Exiles is incredibly complicated.  I had the Game-of-Thrones problem of not being able to keep characters and plot lines straight as we switched back and forth between Froi and Lucian.  However, when I read carefully I was able to untangle the threads and find a plot that sparkled.  Marchetta has a unique ability to take a character that did some thoroughly dispicable things (attempted rape) and make him someone a reader wants to identify with.  Froi also had a great foil with Quintana, showing them as two people linked by fate and also in similar situations fighting to survive and make sense of a crazy world.  The pacing was a little strange due to the switching points of view, but it still had some real high points and the lulls were well placed.  The real gem was in the worldbuilding.  I loved being able to see yet another country in Marchetta's world, and I can't wait to see more!
Posted by Aurora at 8:30 AM