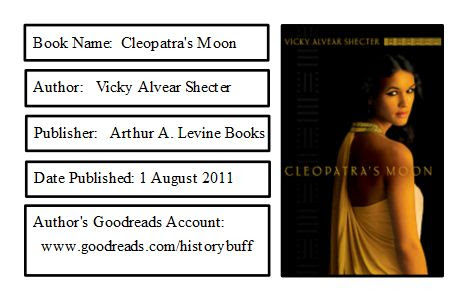 "The Luxe" meets the ancient world in the extraordinary story of Cleopatra's daughter. Selene has grown up in a palace on the Nile with her parents, Cleopatra & Mark Antony—the most brilliant, powerful rulers on earth. But the jealous Roman Emperor Octavianus wants Egypt for himself, & when war finally comes, Selene faces the loss of all she's ever loved. Forced to build a new life in Octavianus's household in Rome, she finds herself torn between two young men and two possible destinies—until she reaches out to claim her own. This stunning novel brings to life the personalities & passions of one of the greatest dramas in history, & offers a wonderful new heroine in Selene.

I know, I’m really stretching the idea of “fantasy” with this book. It’s really more of a fictional biography, but I’m gonna claim fantasy because there is one scene where Cleopatra Selene casts a spell and communes with a goddess.

I really liked this book. It cast the world of Ptolemaic Egypt in a new light for me and gave a new face to the legendary characters. Selene is a great character. I thought her determination and will were a great trait that she shared with her mother. At first I was a little surprised that she also didn’t share her mother’s legendary sexuality as a manipulation tool, but the book does a very good job at presenting Selene as not only adapting to survive but also rejecting the parts of her mother that she thinks led to her downfall. The romance in the book is barely there, but this is not a bad thing. Selene’s life is adventurous enough, and just staying alive takes up much of her time. The plot closely followed history, but it flowed very well and only seemed forced near the end where history took a strange turn that the author didn’t connect to the rest. That end was rather abrupt and out of character for Selene, and I feel it could have been better written so that it flowed better and fit the rest of the book. I forgive it, though, because it did make me happy about leaving her in a good place. In all I feel that this book is totally worth reading.
Posted by Aurora at 1:26 AM