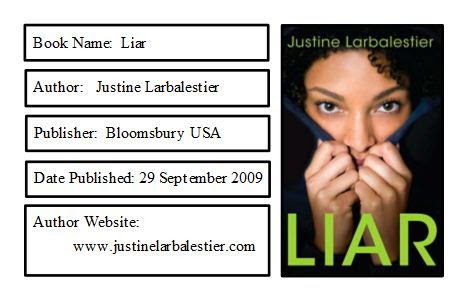 Micah will freely admit that she’s a compulsive liar, but that may be the one honest thing she’ll ever tell you. Over the years she’s duped her classmates, her teachers, and even her parents, and she’s always managed to stay one step ahead of her lies. That is, until her boyfriend dies under brutal circumstances and her dishonesty begins to catch up with her. But is it possible to tell the truth when lying comes as naturally as breathing? Taking readers deep into the psyche of a young woman who will say just about anything to convince them—and herself—that she’s finally come clean, Liar is a bone-chilling thriller that will have readers see-sawing between truths and lies right up to the end. Honestly.

I think the best way to describe this book is “mystery”. From the first page to the last you’re not sure what you’re reading, and slightly uneasy that you don’t quite understand what’s going on, but the author puts that tension to work and keeps the reader guessing throughout the entire book. At first I wasn’t sure how I would react to having a liar as a narrator, but it doesn’t take long before you realize that Micah’s lies are part of the exposition and start to enjoy the game of guessing whether what’s being told to you is the full truth or not. Add in the major twist in the middle that makes this book solidly fantasy and the ending that makes the reader still unsure if anything they’ve read is true or false to Micah, and you’ve got a thoroughly entertaining read. It takes great skill to make a liar accessible and identifiable as a protagonist, and even more skill to make that person sympathetic, but Larbalestier accomplishes both brilliantly. The plot has predictable reveals of Micah “revising” her story, but the revisions are so different that they don’t seem formulaic or staid at all. If you don’t mind being a little uncomfortable I think you should try Liar, it packs a great payout.
Posted by Aurora at 1:42 AM