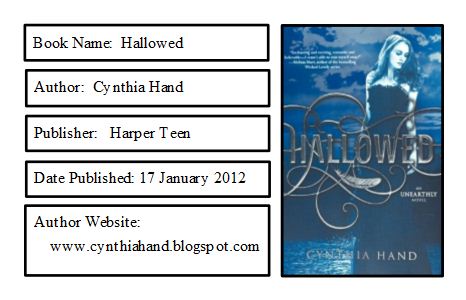 For months Clara Gardner trained to face the fire from her visions, but she wasn't prepared for the choice she had to make that day. And in the aftermath, she discovered that nothing about being part angel is as straightforward as she thought. Now, torn between her love for Tucker and her complicated feelings about the roles she and Christian seem destined to play in a world that is both dangerous and beautiful, Clara struggles with a shocking revelation: Someone she loves will die in a matter of months. With her future uncertain, the only thing Clara knows for sure is that the fire was just the beginning. In this compelling sequel to "Unearthly," Cynthia Hand captures the joy of first love, the anguish of loss, and the confusion of becoming who you are.


I loved Unearthly and I couldn’t wait for this book.  It did not disappoint either.  Although I’m not usually one for love triangles I really like how this one is developing.  Both Tucker and Christian are good choices with no bad traits.  Their differences really lie in the parts of Clara that they appeal to and the good traits they bring out in her.  It really seems as if Christian appeals to Clara’s angelic side while Tucker helps her to cultivate her humanity, and since both are a part of her the conflict is exciting to watch as a reader.

It is also interesting watching the characters in the book try to deal with the results of their actions in <u>Unearthly</u>.  I especially liked getting to know Jeffrey.  When he reveals the truth about his purpose my heart broke right along with Clara’s (and, actually, I thought Clara’s should have broke a little more with what he has to say).  Angela has developed into a quite intriguing character as well, and it is great that we really get to see the better side of Christian.

My only fault with this book really was how Clara’s mother developed.  Although it may propel the plot I have a large difficulty with the woman actually saying the words “my purpose in life was to give birth to you.”  Way to reduce a strong female character and role model into a stereotype.  I could have forgiven it if Maggie’s purpose was a little different, for example, if her purpose was to protect Clara and Jeffrey from Samjeeza.  I know that this book presented Maggie at her worst, however, it really bugged me to see her accomplishments minimized even while they are only being discovered.

In all, though, this was a solid sequel and a very good book.  I can’t wait to read more in this series, so much in fact that I kinda hope this is not a trilogy and there is more than one book to come.
Posted by Aurora at 12:30 AM