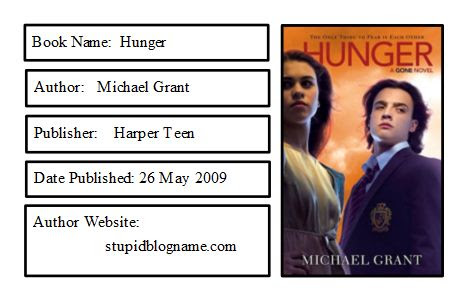 It's been three months since everyone under the age of fifteen became trapped in the bubble known as the FAYZ. Three months since all the adults disappeared. GONE. Food ran out weeks ago. Everyone is starving, but no one wants to figure out a solution. And each day, more and more kids are evolving, developing supernatural abilities that set them apart from the kids without powers. Tension rises and chaos is descending upon the town. It's the normal kids against the mutants. Each kid is out for himself, and even the good ones turn murderous. But a larger problem looms. The Darkness, a sinister creature that has lived buried deep in the hills, begins calling to some of the teens in the FAYZ. Calling to them, guiding them, manipulating them. The Darkness has awakened. And it is hungry.

Although it was inevitable from the last book Hunger was even more bleak than Gone. There’s more and more of a downward spiral towards inevitable disaster, and I’m not sure I can follow to see the crash. This book has some good plot points: the continuing battle between Caine and Sam, the quickly disappearing food, further conflicts between the super-powered and the kids who haven’t developed powers, and more exposition about The Darkness. Rather than building tension, though, I really felt like these plot points were more about dog piling on an already grim situation. Instead of feeling anxious I felt hopelessness. About a third of the way through I felt similar to the kids, and I could feel the fight leach out of me as I decided I’d rather lay down and die than suffer like the kids were. Perhaps that is the aim of the author, to induce in the reader the feelings the kids are having in the book, but I wasn’t exactly pleased to experience it with no sense of hope. The cast of characters expanded in this book again, and as we got to know more of the kids better the hopelessness only increased. It actually got painful to get to know kids that you were sure were doomed. Other than the author beautifully putting the reader into the situation I had a few other problems with the book. The ending pivots on a highly strange tale involving the town’s nuclear reactor. While this justifies all the time spent describing it in Gone, it seemed very confusing. The chain of events was implausible at the least, and ridiculous as described. There are some simple ways to make things work, but the author didn’t go there which is annoying. If you are going to go to all the detail of describing a working nuclear reactor I’d think you would put in a little more work to make it accurate as well as propel the plot. The very ending finally seems to give hope to the kids, but it’s so late in the book I’m doubtful it’s going to result in real change and progress. I’ll keep reading, though, because something has me hooked and I have to see things through to the end.
Posted by Aurora at 12:30 AM