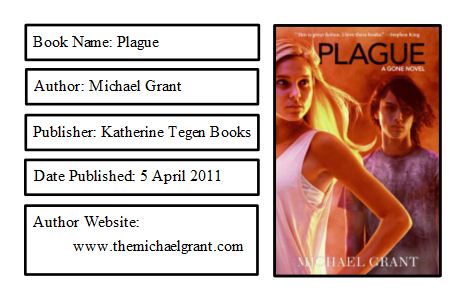 It's been eight months since all the adults disappeared. GONE. They've survived hunger. They've survived lies. But the stakes keep rising, and the dystopian horror keeps building. Yet despite the simmering unrest left behind by so many battles, power struggles, and angry divides, there is a momentary calm in Perdido Beach. But enemies in the FAYZ don't just fade away, and in the quiet, deadly things are stirring, mutating, and finding their way free. The Darkness has found its way into the mind of its Nemesis at last and is controlling it through a haze of delirium and confusion. A highly contagious, fatal illness spreads at an alarming rate. Sinister, predatory insects terrorize Perdido Beach. And Sam, Astrid, Diana, and Caine are plagued by a growing doubt that they'll escape - or even survive - life in the FAYZ. With so much turmoil surrounding them, what desperate choices will they make when it comes to saving themselves and those they love? Plague, Michale Grant's fourth book in the bestselling Gone series, will satisfy dystopian fans of all ages.

I love how this series is really starting to catch its wind. With this book it takes the sharp left turn into fantasy that had been hinted at in the last three books, however, I consider that a strong suit. In giving up any contrivance of a scientific basis and setting up a world where there were rules but they were governed by one person’s notions there is so much explanation and holes that can be just skipped over. Thankfully it also gets us away from the nuclear power plant where most of my scientific issues reside (darn that military nuclear training and the nuclear engineer husband making books difficult!).

This book also took a turn for the better because I really started to have hope for the characters. There is so much more in the expansive world of the FAYZ than what we’ve been shown, and this book showed us that with a little sleight-of-hand our characters can discover new places and new ways to survive (I had been wondering about the military base for a long time, it was on the map the whole time, and military bases have grocery stores and industrial cafeterias too!). I also liked the growth of the female characters in this book. Astrid’s breakdown was a long time coming, and I think it really played out in a realistic and compelling way. I really empathized with her issue and the conflict between her intellect and her morality. It was an interesting foil to the conflict with Diana’s feelings and her morality and how the two girls dealt with issues surrounding their relationships was very telling for their characters. I didn’t feel that Sam or the other boys (except maybe Edilio) grew much in this book, but that may be because I more naturally identify with girls. Although the ending was unexpected and a little *rocks fall, everything dies* I liked it. Changing up the game and surprising everyone was something that was really needed in this series. I’ll be looking to get the next book when it comes out soon because I really want to know what happens next!

This book was provided to me free by the publisher in exchange for an unbiased review.
Posted by Aurora at 1:00 AM