The Last Princess by Galaxy Craze 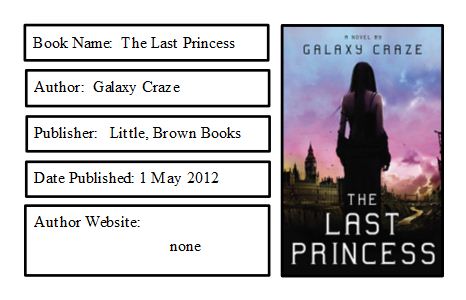 Happily ever after is a thing of the past.

A series of natural disasters has decimated the earth. Cut off from the rest of the world, England is a dark place. The sun rarely shines, food is scarce, and groups of criminals roam the woods, searching for prey. The people are growing restless.

When a ruthless revolutionary sets out to overthrow the crown, he makes the royal family his first target. Blood is shed in Buckingham Palace, and only sixteen-year-old Princess Eliza manages to escape.

Determined to kill the man who destroyed her family, Eliza joins the enemy forces in disguise. She has nothing left to live for but revenge, until she meets someone who helps her remember how to hope—and to love—once more. Now she must risk everything to ensure that she not become... The Last Princess.

I’ve been wanting to read this book for a very long time. I love the premise of following a monarchy through a disaster instead of everyday people. It has a different flavor than your everyday post-apocalyptic dystopia. Although The Last Princess was nothing like I expected I was not disappointed in the least in how things turned out. The book is full of predictable twists and turns, but the author’s fresh take on things made me not mind so much.

The plot charges at a breakneck pace, using lots of action and drama to keep things moving. Towards the end of the book it seems too fast, though, as if you’re going so fast you’re about to fly off the tracks. I think it needed a few more pauses and lulls for the reader to catch up and absorb what’s going on. It’s almost as if the book could have benefited from another 50-100 pages even though it’s not short to begin with. Although the book had a nice wrap up it also neatly set up the sequel without leaving a huge cliffhanger, which I like.

The characters are well written. I loved Wesley and how he was presented as a complicated individual almost as much as I loved Eliza and her headstrong will to survive and save her family. I do wish we saw more of both their motivation, though. Not that either seemed to act illogically, just that the book could have benefited from some more inner monologue. Cornelius Hollister is a perfect villain, and my only beef with him is “why in the world would anyone follow him?”

In all The Last Princess was enjoyable, and I will be looking for the sequel. If you can handle a little predictability and slight pacing issues then I recommend it to you as well.
Posted by Aurora at 8:00 AM