The Hunt by Andrew Fukuda

Since I'm on Vacation this week I can't do Follow Friday, so you get an extra book review instead. 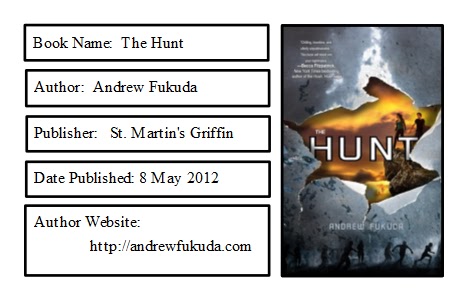 Don’t Sweat. Don’t Laugh. Don’t draw attention to yourself. And most of all, whatever you do, do not fall in love with one of them.

Gene is different from everyone else around him. He can’t run with lightning speed, sunlight doesn’t hurt him and he doesn’t have an unquenchable lust for blood. Gene is a human, and he knows the rules. Keep the truth a secret. It’s the only way to stay alive in a world of night—a world where humans are considered a delicacy and hunted for their blood.

When he’s chosen for a once in a lifetime opportunity to hunt the last remaining humans, Gene’s carefully constructed life begins to crumble around him. He’s thrust into the path of a girl who makes him feel things he never thought possible—and into a ruthless pack of hunters whose suspicions about his true nature are growing. Now that Gene has finally found something worth fighting for, his need to survive is stronger than ever—but is it worth the cost of his humanity?

I started out loving this book’s premise. It’s a nice twist to see a plot about humans hiding in plain sight among vampires instead of vampires hiding in human society. The book doesn’t disappoint, either. The plot is refreshing, with hints of a love triangle that never pan out, a quick pace with lots of tension even though there’s little action or blood, and tons of developing introspection. The vampire society is doled out in small enough chunks that you never feel there’s an info dump going on. The character development is skillfully done, detaching the reader from the characters, especially Gene, in order to show his isolation and emotional turmoil and yet as a reader you’re still drawn to him and root for him. The other characters, though, are harder to like since you know they are ultimately the enemy, which works against some of the things the author tries to accomplish in the book. I’ve heard this billed as a Hunger-Games ripoff, and while I can see the connections I think there’s more than enough unique about The Hunt to draw new readers in.

I received a copy of this book free through NetGalley in exchange for an unbiased review.
Posted by Aurora at 8:00 AM