Sirenz: Back in Fashion by Charlotte Bennardo & Natalie Zaman 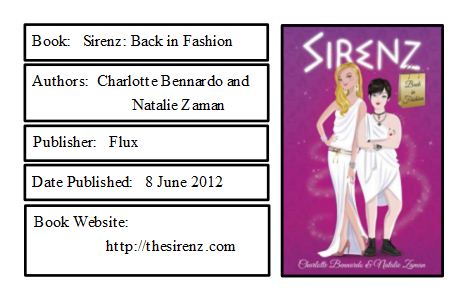 When Shar tries on a ring from Hades, it activates an obscure contractual clause that puts Shar and former-frenemy-now-friend Meg in Hades' service once more. Shar is whisked away to the Underworld to prepare a ball for Persephone, while Meg is sent to retrieve the errant soul of spoiled rich girl Paulina Swanson and send her to the abyss. Just when it appears the girls will be doomed to serve Hades for eternity, Shar meets two possibly helpful demi-gods who also happen to be gorgeous. Can the girls finally ditch the Lord of the Dead once and for all?

Another great book in the Sirenz series! Back in Fashion is a quick read full of sarcasm and banter. I didn’t feel that there was as much character development as the first book, but Shar and Meg are faced with much more plot than they had before. They’re also given choices and realizing that maybe Hades isn’t the only one who can have selective dealings. I liked seeing the girls work things out in a logical and plausible way and trying to help themselves and follow their consciences rather than just doing as Hades says to get the contract over with. Although the major plot does hinge on something very . . . odd and rather implausible, and the setup for book 3 is a bit heavy handed, if you can just go with the story and ignore them the book is very satisfying. In all Back in Fashion is a quick summer read that I recommend you forget the world with!


I received a copy of this book free through NetGalley in exchange for an unbiased review.
Posted by Aurora at 12:30 AM