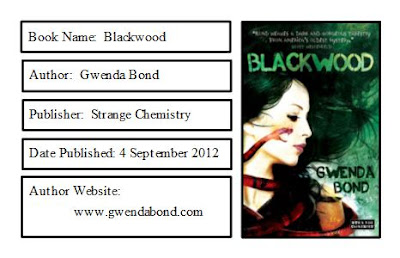 On Roanoke Island, the legend of the 114 people who mysteriously vanished from the Lost Colony hundreds of years ago is just an outdoor drama for the tourists, a story people tell. But when the island faces the sudden disappearance of 114 people now, an unlikely pair of 17-year-olds may be the only hope of bringing them back.

Miranda, a misfit girl from the island’s most infamous family, and Phillips, an exiled teen criminal who hears the voices of the dead, must dodge everyone from federal agents to long-dead alchemists as they work to uncover the secrets of the new Lost Colony. The one thing they can’t dodge is each other.

Blackwood is a dark, witty coming of age story that combines America’s oldest mystery with a thoroughly contemporary romance.


I think the real hook in this book is its premise.  I loved the idea of the people of Roanoke disappearing again.  The thought of Miranda and Phillips having complimentary powers and needing to help each other intrigued me too.  In the end, though, this was really a love story with the rest of the mystical plot as complications and road blocks.  It was well done, though, so I didn't really care.  I think that's at least partially because the missing people plot goes off into strange and sometimes nonsensical directions.  There was little I could predict about it, but that's because it was completely unexpected at many turns and often things came out of nowhere, while other things were completely stereotypical.  I think the author did a little too much to maintain the mystery and didn't build a solid base for her plot twists.  It didn't matter much, though, because the book flowed really well and the romance plot served to really bind everything together.  I thought Miranda and Phillips were well written, and they grew into their romance pretty organically, even if it was a bit quickly.  There were logical progressions to their feelings and they didn't have any strange insta-love issues or nonsensical triangles.  In the end it really kept this book going, and I'd be happy to read a sequel or other book by Bond.
Posted by Aurora at 8:00 AM