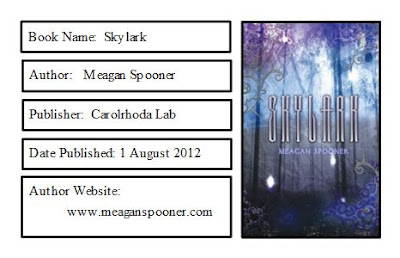 Her world ends at the edge of the vast domed barrier of energy enclosing all that’s left of humanity. For two hundred years the city has sustained this barrier by harvesting its children's innate magical energy when they reach adolescence. When it’s Lark’s turn to be harvested, she finds herself trapped in a nightmarish web of experiments and learns she is something out of legend itself: a Renewable, able to regenerate her own power after it’s been stripped.

Forced to flee the only home she knows to avoid life as a human battery, Lark must fight her way through the terrible wilderness beyond the edge of the world. With the city’s clockwork creations close on her heels and a strange wild boy stalking her in the countryside, she must move quickly if she is to have any hope of survival. She’s heard the stories that somewhere to the west are others like her, hidden in secret—but can she stay alive long enough to find them?


I had high hopes for this book.  The premise seemed very interesting and the cover was so pretty that I really wanted to like it.  I'm sad that the book didn't live up to my standards, although I think part of that is me building them up too high.  The book wasn't a complete disappointment, but it was not much more than average.  I think its major problem was in pacing.  There were some major lulls where not much happens or some very repetitious events happen for quite a while.  I wish they could have been broken up better with twists or some other event.  The plotting is bare bones and really could have been thought through a little more.  I did like the characterization.  Lark was easy to love, and Oren is realistic and consistent even if he is a little harder to identify with.  I loved Nix and her development (I dunno why, but Nix is a her).  The worldbuilding is solid and consistent, and unlike other reviewers I didn't mind that they never explained the magic or how it works.  I guess I'm such a fantasy fan that magic just is and doesn't need a why.  The dystopian society, though, was thoroughly realistic, and I felt that the best parts of the book were while Lark was trying to escape her fate there.  Afterwards things got rather hazy, and I got frustrated at the lack of direction.
Posted by Aurora at 4:22 PM