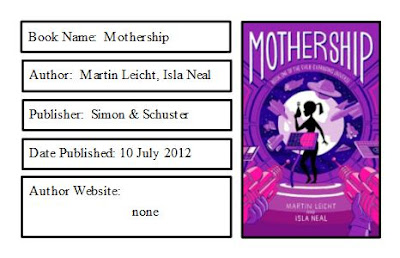 Elvie Nara was doing just fine in the year 2074. She had a great best friend, a dad she adored, and bright future working on the Ares Project on Mars. But then she had to get involved with sweet, gorgeous, dumb-as-a-brick Cole--and now she’s pregnant.

Getting shipped off to the Hanover School for Expecting Teen Mothers was not how Elvie imagined spending her junior year, but she can go with the flow. That is, until a team of hot commandos hijacks the ship--and one of them turns out to be Cole. She hasn’t seen him since she told him she’s pregnant, and now he’s bursting into her new home to tell her that her teachers are aliens and want to use her unborn baby to repopulate their species? Nice try, buddy. You could have just called.

So fine, finding a way off this ship is priority number one, but first Elvie has to figure out how Cole ended up as a commando, work together with her arch-nemesis, and figure out if she even wants to be a mother--assuming they get back to Earth in one piece.


It's been a while since I read some comedic sf.  Usually SF takes itself much too seriously.  This book, however, is anything from serious and totally perfect.  The plot of this book is barely plausible.  Alien pregnancies multiplied to the nth is always kinda crazy.  The protagonist, however, injects a measure of seriousness and life to the plot while remaining a snarky teenager able to make us laugh.  It's a tenuous balance, but the authors walk it very well.  The beginning was full of flashbacks, so it was a little hard to keep track of where you were in the timeline, but as the book went on it really hit its stride.  The plot, though, is really secondary to the narrator.  Elvie really carries this book with her sarcastic wit and her drive to survive.  She has to deal with some very heavy stuff as the book goes on, but somehow her attitude and humor pull us past it.  If I had a complaint about the book it would be related to this: we see so many pregnant teenagers die in this book, but there is little emotional impact because the writing keeps things light a little too much.  Cole is a big part of this, and his dim-as-a-fireplace-poker intelligence takes us through many things with an amused atmosphere of "how will he screw up next?"  In all this is a great book, and I'd recommend it as a palate cleanser for some of those heavier, horror filled sf novels.


I received a review copy of this book from the publisher in exchange for a non-biased review.
Posted by Aurora at 1:14 PM