And All The Stars by Andrea K. Höst 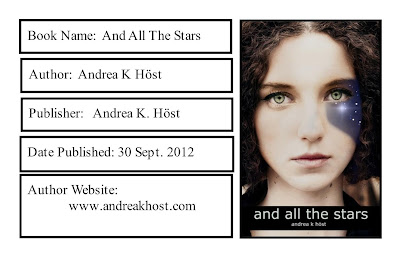 Come for the apocalypse. Stay for cupcakes. Die for love.

Madeleine Cost is working to become the youngest person ever to win the Archibald Prize for portraiture. Her elusive cousin Tyler is the perfect subject: androgynous, beautiful, and famous. All she needs to do is pin him down for the sittings.

None of her plans factored in the Spires: featureless, impossible, spearing into the hearts of cities across the world – and spraying clouds of sparkling dust into the wind.

Is it an alien invasion? Germ warfare? They are questions everyone on Earth would like answered, but Madeleine has a more immediate problem. At Ground Zero of the Sydney Spire, beneath the collapsed ruin of St James Station, she must make it to the surface before she can hope to find out if the world is ending.

I'm not sure why, but I just didn't "get" this book. All the pieces were there, but they just didn't fit together somehow.  It wasn't the characterization, though.  I did enjoy Madeleine and getting to know her and watch her overcome some pretty steep odds.  There were other characters I liked, too, especially Noi.  However, at times I did have problems telling some of them apart, especially the gang of boys.  I also had problems with the nickname usage, there were times when the author would switch to using a nickname without telling you who was being addressed.  It took me a while to recognize Emily and Millie as the same person.

I think my major problem was with the plot.  I don't want to spoil too much, but I found the plot very disjointed and random.  It starts with the obelisks that land in cities and spew dust everywhere that makes people sick and turns the survivors either green or blue.  Later on things happen to the spires, and other events, and it really doesn't connect much to the beginning.  There's little foreshadowing of events to come as well, so every plot twist seems very "deus ex machina" with no other purpose than to challenge the cast of characters yet again.  The pacing works well, the author has the timing down as to when major events need to happen, I just didn't feel like the events were plausible based on the knowledge given.  Too bad, I really wanted to like this book and did love its portrayal of a transsexual and a homosexual relationship.
Posted by Aurora at 4:48 PM

Email ThisBlogThis!Share to TwitterShare to FacebookShare to Pinterest
Labels: Alien