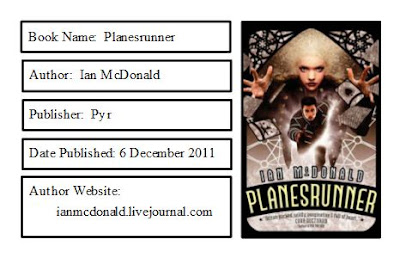 When Everett Singh’s scientist father is kidnapped from the streets of London, he leaves young Everett a mysterious app on his computer. Suddenly, this teenager has become the owner of the most valuable object in the multiverse—the Infundibulum—the map of all the parallel earths, and there are dark forces in the Ten Known Worlds who will stop at nothing to get it. They’ve got power, authority, the might of ten planets—some of them more technologically advanced than our Earth—at their fingertips. He’s got wits, intelligence, and a knack for Indian cooking.

To keep the Infundibulum safe, Everett must trick his way through the Heisenberg Gate that his dad helped build and go on the run in a parallel Earth. But to rescue his dad from Charlotte Villiers and the sinister Order, this Planesrunner’s going to need friends. Friends like Captain Anastasia Sixsmyth, her adopted daughter, Sen, and the crew of the airship Everness.

Can they rescue Everett’s father and get the Infundibulum to safety? The game is afoot!


I'll be honest, Picacio's cover really made me want to read this book.  It's just a really catching, neat thing to look at.  Fortunately for me, I wasn't led astray.  This book is even better than the cover suggests.

The first thing that grabs is the characterization.  From the first page Everett comes to life, convincingly acting like a kid and yet also realistically solves one of the toughest mathematical problems in modern physics.  The next truly grabbing character is Sen.  She is the perfect foil to Everett, and proves to be a great tour guide to E3 and the new London we're introduced to.  The book starts up by immediately launching into Everett's problems, and the pacing is breakneck but clever and suspense-filled, never leaving enough time to turn into anything but brilliance.  The ideas are weighty, from the concept of infinite universes to understanding the infundibulum and the "knots" Everett uses to make it work, but McDonald has a great way of explaining things so that they never feel overwhelming.  The whole is a fun ride that makes me totally desperate for the next book in the series.

I received a review copy of this book from the publisher in exchange for a non-biased review.
Posted by Aurora at 6:24 PM