The Half-Blood by Janine K. Spendlove 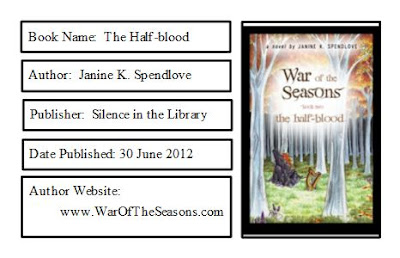 ~~~“Spring has something of mine; he knows what it is.” She smiled coldly. “I need you to bring it to me.”

“And why would I do that?” Story folded her arms over her chest.

A branch from the sidhe’s hair glided out in front of her, bearing a single, small acorn. “Because I poisoned Eírnin.”

One of the tattoos on her shoulder coalesced into a live oak leaf, and she plucked it before standing up and holding it out toward Story. “And if you want the antidote, you will bring me what I seek.”

Story lunged for the leaf, but the Autumn Princess was too quick and crushed it in her hand. “You have until winter’s first frost reaches him. Then, he dies.”

Without waiting for a response, Metirreonn disappeared in a scattering of red-gold leaves and sparks. ~~~

Six months after arriving in the world of Ailionora, Story finds herself once again on a quest; only this time it is not to save a dying race but the life of the elf she loves. Along the way, she must face the consequences of her previous choices and battle with enemies both old and new while she races against time.

“Engagingly demonstrates that readers of all ages can get drawn into a world of magic and adventure.” — Karen Lyon, The Hill Rag

Another great adventure for Story!  Just like the last book the Half-Blood was packed full of Tolkienisms, great worldbuilding, and some wonderful character development.  Although the story twisted a knife in my heart I ended up liking that Eirnin was out of the picture for most of the time because it really helped to develop some of the other characters.  Story especially shines without him, becoming even more independent and standing well on her own.  In Eirnin's absence Morrigann also develops a lot, becoming more of a sympathetic character rather than just a plot device and evil force.  Eachan also has some excellent scenes towards the end.  As to the plot, it is a continuation of the great adventure.  We get to see more of Ailionora, and we meet the Dwarves and Trolls as well as some new monsters.  We also learn a lot about the seasonal fairies and what their duties and powers are.  The scope of Ailionora continues to grow, and it is put together with great skill and shows few cracks.  If I had to complain about something it would be that the plot has its usual pacing issues, however, the slow gait makes the book read more like Tolkien and can also be viewed as a plus if you like the old-fashioned style of epic fantasy that lets you see the craft behind the plotting.  The pace also picks up more in this book than it did in the last, becoming closer to what modern sensibilities like towards the middle and end.  It's enough to make me hungry for more, even without a typical cliffhanger ending!
Posted by Aurora at 8:00 AM